Alesis Recital vs Pro: Which Keyboard is Better?

Have you looked at keyboards but can’t decide on which one works best for you? Maybe you’ve narrowed it down to the Alesis brand but can’t decide between the Alesis Recital and the Recital Pro. On the surface, they seem to look similar, but the prices are pretty different. So what makes these worth different prices, and is one better than the other?

The short answer is yes, one is better than the other.

Here’s a quick summary of the key advantages and disadvantages of both the Recital and Recital Pro by Alesis. There are a few main differences between these two keyboards but despite their similarities and coming from the same company, there are features that make them distinct. 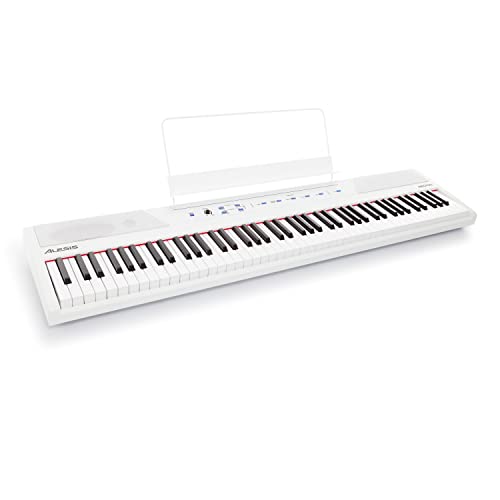 Overall, both have some positives and negatives. However, there is a clear winner between these two thanks to all the additional care and features placed on them.

Winner: Don’t want to read the full article? The editor’s choice is the Alesis Recital Pro.

We’ve broken some of their many advantages and disadvantages down above, but keep reading to learn more about the specifics and why we chose the Alesis Recital Pro as our clear winner.

What’s the Difference Between the Recital and Recital Pro?

Out of these options, unweighted is the worst for the most realistic playstyle while the hammer is the best. However, hammers are often traditionally more expensive and heavier. Due to the way the hammer works, the keys, and therefore the keyboard, are a bit longer.

Like regular acoustic keys, the hammer keys have different weights depending on what kind they are. For example, the bass keys are usually heavier while the treble keys are generally a bit lighter. Hammer keys mimic this instead of having all the keys have the same weight and feel.

Weighted keys are the next best. It has a high resistance that makes the bounce of the keys feel better and allows the player to practice endurance. Semi-weighted are similar, but lack the same level of resistance, and are slow to come back up.

If you want the feel of a traditional piano, the hammer keys are the way to go. For the price range, this is very impressive, as most keyboards in the same ballpark don’t offer hammer keys.

However, that being said, and while Recital Pro is still the clear winner here, it is worth noting that these hammer keys don’t feel like traditional hammer keys. So if you’ve used hammer keys in the past, you may find that this doesn’t work quite the same as some of those.

If you are new to using a piano, you don’t want to spend a large chunk of money on something you aren’t even sure how to use yet. However, you also don’t want to just go for the cheapest option. Finding the balance between price and quality is a tough battle, but necessary.

Usually, the Alesis Recital is about $100 cheaper than the Alesis Recital Pro. Though it doesn’t have nearly as many features as the Pro version, for the cost, it is a pretty decent keyboard. Compared to a lot of other keyboards in this price range, it has better speakers and polyphony than others.

For this reason, the Alesis Recital wins regarding cost.

When you want to create your musical compositions, you need to be able to record your work. Having a recording option built into your keyboard is a necessary feature.

Even if you don’t want to record yourself to make compositions, being able to listen back to your playing to identify where you messed up, or where you improved can be a great benefit as well. Since the Alesis Recital doesn’t have a recording mode, the Alesis Recital Pro is the clear winner.

When choosing a digital keyboard, knowing which kinds of inputs and outputs.

What matters here is your equipment. This output is designed to hold sound systems such as recorders, amplifiers, mixers, and more. So depending on the systems you have, and the outputs they take, you may have a preference for either the Recital or the Recital Pro.

Both keyboards also come with three months of Skoove Premium. This is considered one of the best and easiest ways to learn piano. There are in-depth piano courses that adjust as you need them and provide useful feedback. There are even actual, experienced musicians that can help you with any questions you may have.

If that isn’t enough, they both also come with two months of TAKELESSONS. These are live lessons from real teachers. There are no limits to the number of classes you can take. While there are plenty of piano lessons, that isn’t all, and you might find something else that interests you as well.

Since the Recital Pro has seven additional voices, it gets our winning vote.

The Alesis Recital has options for chorus and reverb FX, as well as a pedal resonance feature if you purchase a pedal for extra.

There are five kinds of both chorus and reverb.

For reverb, these are:

While for Chorus, they have:

The pedal resonance works with the reverb, allowing for an additional reverb effect. All of these allow you to get sounds and echoes that might mimic realistic environments that an actual piano would face. That way, you can get a true feel of the sounds.

For the Alesis Recital Pro, you get the reverb, chorus, and pedal resonance, but you also get one additional feature. These are the modulation effects. These effects are tailored to fit the sound presets. So if you have an organ, you get a rotary effect, and the piano would get a tremolo effect.

While there isn’t as much variation as some keyboards, it is a huge upgrade from the Recital and had some much-needed modulations. For this reason, the Alesis Recital Pro is our winner.

While the size and weight may not affect some people, we are a family that likes to move around and play in various places. For that reason, we wanted something light and smaller.

Both of these are 88-key keyboards, which mimic a real piano. Other key numbers would make them smaller and lighter weight, but we wanted something as close as possible to the real thing.

However, despite the same amount of keys, the Alesis Recital manages to be a little smaller. We think a lot of this is due to the hammer-type keys instead of the weighted keys of the Recital, but either way, it’s a definite loss for the Recital Pro.

While the Alesis Recital Pro is the one we prefer, for the price, both are good products. They have features and pros and cons that may make one stand out more for you than another. The cost alone can have a huge influence.

However, if you have a little extra to spend and just want to get something a little nicer, go with the Recital Pro. Not only does it have a better key feel, but it also has a lot more sound variety and lessons to help you get started.